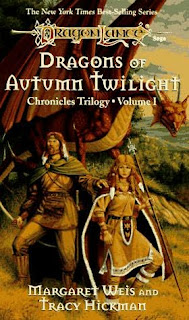 There is a war brewing between the gods (which seem absent) and the forces of evil. A small band of adventurers including a dwarf, a half elf, a warrior and his twin brother wizard, a knight, and a kender (think hobbits with ADHD) must find out what happened to the gods, defeat the draconian army, and find a way to stop the evil forces from ruling the world. No problem.

Many years ago, pretty much the only book you could get that had dragons and magic and such was The Lord of the Rings. This book changed all that.
Posted by Alford at 2:37 PM

I read this book in 9th grade and absolutely loved it. I had never really read any books about magic or dragons before. The whole series is good and I'll have to eventually get the rest of them for class. I really liked the character interaction and most of all, the kender - a kleptomaniac hobbit like creature with no fear. I also like how in this series, the authors do not care about keeping their characters alive, so you never know if someone is going to die or not.