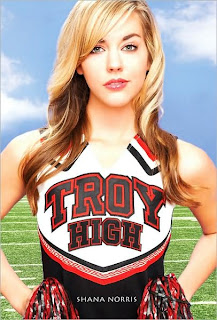 Narrated by Cassie, a shy outsider who fears that an epic high school rivalry is about to go up in flames, the story follows the Trojans and Spartans as they declare war on the football field. After the beautiful Elena—who used to be the captain of the Spartan cheerleaders—transfers to Troy High and falls madly in love with Cassie’s brother Perry, the Spartans vow that the annual homecoming game will never be forgotten.

The Trojans and Spartans pull wicked pranks on each other as homecoming approaches. And the Spartans’ wildcard football star, Ackley, promises to take down the Trojans’ offensive line. But the stakes are raised when Cassie is forced to choose between the boy she loves (a Spartan) and loyalty to her family and school. Troy High will seduce readers with its incendiary cast of mythic proportions.
Posted by Alford at 2:29 PM

i absolutly hate this book.its not easy to follow.

I liked the book because it was very interesting. i enjoyed the pranks they did on each other. i also loved the romance in the book to. i was also ready for Cassie and Greg to get together they both was best friends but they wanted to be together they just didn't wanna mess up there friendship by making the first move. i love there friendship they could play videos together like friends and things were never awkward between them even though they liked each other. The pranks each school played on each other was funny . especially when one school put lactose in the other schools spaghetti. I rate This Book A 10 .
Diamond Evans

I like the book its interesting. It is a romance book and I look romance books.They have good friendship but they move too quick.