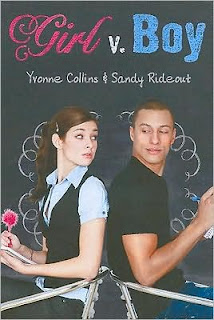 
All's not fair in love, war, and high school journalism

Sixteen-year-old Luisa Perez is not looking to win any awards for school spirit. In fact, she and her friends make it a point to avoid all activities considered "extra-curricular." So when her English teacher volunteers her to be an anonymous columnist for the school paper, Luisa's first impulse is to run. But, unlike her high-school dropout sister, Luisa does want to go to college-it may be her only ticket out of a life spent working at the cowboy-themed diner where she waitresses part time-and it would be nice to something on her applications.

Her first assignment is to cover her high school's latest fundraiser, which pits the girls against the boys. Luisa will cover the events from the female POV, while another anonymous writer provides the male perspective-or, at least, that's how it begins. The two columnists soon find themselves engaged in an epic battle of the sexes-a battle that Luisa is determined to win. Just who does this guy think he is, encouraging his peers to act like Neanderthals with their girlfriends? And why can't Luisa shake the very sinking feeling that her new unidentified nemesis might also be her new boyfriend?
Posted by Alford at 2:24 PM