Shadows of the Empire 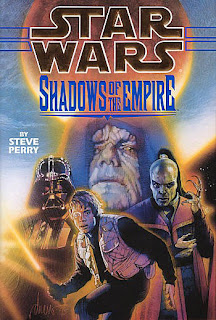 
Shadows of the Empire


It is a time of crisis. Han Solo, frozen in carbonite, is being taken to the vile gangster Jabba the Hutt. As Princess Leia mounts a rescue mission including Luke Skywalker, Lando Calrissian, and a brilliant young pilot, Darth Vader pits himself against a cunning and ruthless rival. Xizor is the leader of a powerful crime syndicate who seeks to supplant Vader for the favor of their mutual master, the dreaded Emperor. Their target: Luke Skywalker. Suddenly Luke finds himself the potential prize of the two most evil entities in the galaxy - one who wants him alive...and one who wants him dead.
Posted by Alford at 7:13 PM