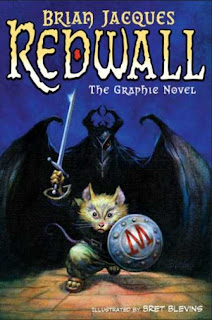 Matthias wishes to be more strong and courageous like how the legends speak of Martin, the warrior mouse who gave the mice of Redwall Abbey their true vocation, but peaceful times do not require such martial skills. Home to a peace-loving order of mice (and one faithful badger), Redwall falls under siege from Cluny the Scourge and his band of bloodthirsty rats, weasels, foxes and the like. With the situation so dire, and the attackers so ruthless, the Abbey is a dangerous place to be, but Matthias discovers what seems to be his destiny - a destiny seemingly linked with Martin himself! But he has a long way to go before that destiny is realized.
While the Abbey's defenses are challenged from both inside and outside the walls, Matthias starts his search for the military items that Martin used during his campaigns. Journeying both far from the Abbey as well as in its deepest recesses, Matthias encounters friends of the mice, enemies of Cluny, and other hazards that Matthias might be able to turn against the foe, but he must survive them first.
Posted by Alford at 1:07 PM