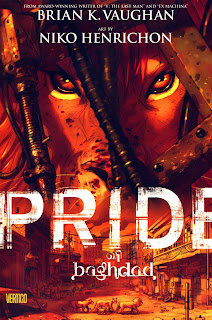 A heartbreaking look at what it's like to live in a war zone. Inspired by true events, this story tells of four lions that escape from the Baghdad Zoo during a bombing raid in 2003 and encounter other animals that offer unique perspectives, such as a tortoise that survived World War I. They begin to question the nature of freedom. Can it be achieved without being earned? What is its price? What do the lions owe the zookeepers who took care of them at the cost of keeping them in captivity? Where should they go? What should they eat? The four lions soon realize that a desert city is nothing like the grassy savannas of their memories. Their experiences mirror those of the Iraqi citizens displaced by the conflict.
Posted by Alford at 1:03 PM