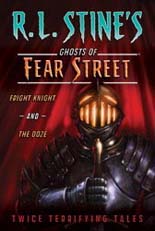 This is two books in one.

In Fright Knight, Mike loves hanging out in his father's weird litle museum on Fear Street until a suit of armor challenges him to a battle to the death.


And it doesn't smell. It just sits there.
Some chemistry set, Al thinks. Big deal.
And then it starts to ooze. It oozes all over the cat. It oozes all over Al's best friend.
Everything the ooze touches...changes. Forever.
And now the ooze is coming right at Al!
Posted by Alford at 3:58 PM