Someday My Prince Will Come 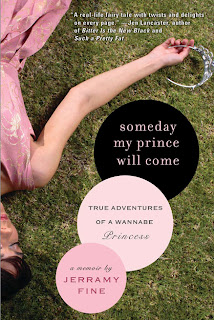 Someday My Prince Will Come: True Adventures of a Wannabe Princess

Jerramy Fine wants to be a princess. At age 6, she announces that she is going to meet and marry the Queen of England’s grandson and even as she gets older, not once does she change her mind! But growing up with hippie parents in the middle of a rodeo-loving farm town makes finding her prince a bigger challenge than Jerramy ever bargained for. How can she prepare to lead a royal life when she’s surrounded by nothing but tofu and tractors?
Jerramy spends her lonely childhood writing love-letters to Buckingham Palace, and years later, when her sense of destiny finally brings her to London, she dives head first into a whirlwind of champagne-fuelled society parties in search of her royal soul mate. She drinks way too many martinis and kisses far too many Hugh Grant look-a-likes, but life in England is not the Disney fairytale she hoped it would be. Her flatmates are lunatics, London is expensive, and British boys (despite their cute accents) are infuriating. Sure, she’s rubbing shoulders with Princess Anne, Earl Spencer and the Duchess of York – but will she ever meet her prince?