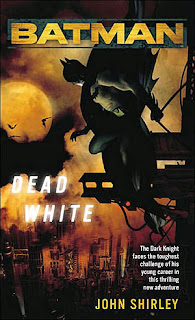 Who better than BATMAN to protect the dangerous city of GOTHAM, where even the cops are crooks? But the latest imminent terror might be too much for the burgeoning CAPED CRUSADER, who is still carving out a place for himself in the minds of GOTHAM's criminals. There's a host of deadly new weapons in BATMAN's glittering, sinister city—in the hands of a psychotic mastermind called White Eyes. With his radical murder machine, the fiendish leader of GOTHAM's racist Bavarian Brotherhood can move beyond dealing drugs and hot guns to pursue his real passion: the white supremacist takeover of America.


*Side Note* - this book came with a warning about the harsh nature of it.
Posted by Alford at 3:14 PM