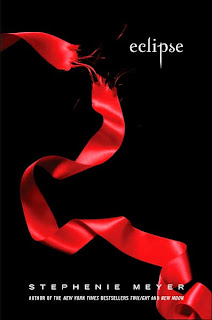 
In the dead silence, All the details suddenly fell into place for me with a burst of intuition. Something Edward didn't want me to know.Somthing that Jacob would't have kept from me.Something that the cullens and the wolves both in the woods, moving in hazardous proximity to eachother. something id been waiting for anyway. Something i knew would happen again, as much as i might wish never would.

It was never going to end, was it?

Edward's soft voice came from behind me. I turned to see him spring lightly up the porch steps, his hair windblown from running. he pulled me into his arms at once, and kissed me again. His kiss frightened me. There was too much tension, too strong an edge to the way his lips brushed mine-like he was afraid we had only so much time left to us.


As Seattle is ravaged by a string of mysterious killings and a malicious vampire continues her quest for revenge, Bella once again finds herself surrounded by danger. In the midst of it all, she is forced to choose between her love for Edward and her friendship with Jacob - knowing that her decision has the potential to ignite the ageless struggle between vampire and werewolf. With her graduation approaching, Bella has one more decision to make: life or death. But which is which?
Posted by Alford at 11:33 AM