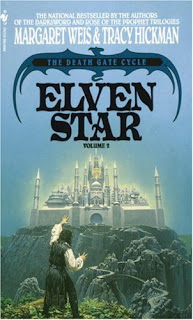 Margaret Weis
Tracy Hickman
Elven Star
Death Gate Cycle Volume 2
Destruction looms over the dwarves, men and elves of Pryan, the World of Fire, in this second volume of The Death Gate cycle, begun in Dragon Wing . Childlike but immensely powerful, eyeless tytans move through the three societies, killing all in their path. Elven arms dealer Paithan Quindiniar, arriving too late with weapons for the dwarves, flees to warn his people, accompanied by Rega, the human woman he warily loves against all convention, and other survivors. Meanwhile, arriving among the elves are Zifnab, a human and slightly addled wizard with an attendant dragon, and Haplo, an agent of the Lord of the Nexus, member of an ancient race that seeks to regain lost power over the four worlds created by the long vanished Sartan. A race for survival ensues.
(This synopsis taken from Amazon.com)
Posted by Alford at 11:42 AM