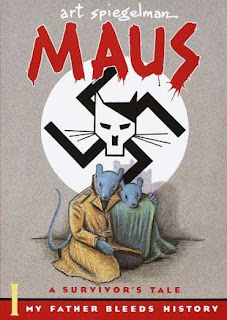 Art Spiegelman
Maus: My Father Bleeds History
This is a comic based on the author's dad's memory of what World War II was like for him.  His dad was a Jew that was caught in the German advance.  Since it is drawn rather than told, you see the Jews as mice, the German's as cats, and other nationalities as other animals (Americans are dogs).
Posted by Alford at 11:34 AM