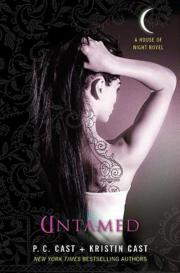 
This is book 5 of the series.

Life sucks when your friends are pissed at you.

Just ask Zoey Redbird – she’s become an undisputed expert on suckiness. In one week she has gone from having three boyfriends to having none, and from having a tight-knit group of friends who trusted and supported her, to being an outcast.  And the worst part is, she knows it’s her own fault.  Speaking of friends, the only two Zoey has left are undead, unMarked, and unable to stop bickering with each other.  So who can blame her for befriending the House of Night’s newest transfer student, the majorly hot Olympic archer, James Stark?

Meanwhile, Neferet has declared a war on humans after it appears that the People of the Faith have murdered two vampyres.  But Aphrodite’s latest visions show a world completely different from the High Priestess’s promises, a world full of violence, hatred, and darkness, all because of Zoey’s death—and the only way it seems she can prevent it from happening is to make things right with her friends.  Zoey knows in her heart that fighting with humans is wrong. But will anyone listen to her?  Zoey's adventures at vampyre finishing school take a wild and dangerous turn as loyalties are tested, shocking true intentions come to light, and an ancient evil is awakened in PC and Kristin Cast's spellbinding fourth House of Night novel.

www.houseofnight.com
Posted by Alford at 9:53 AM