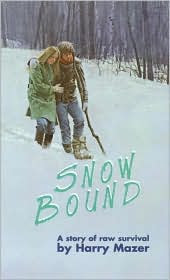 At fifteen, Tony Laporte is what many people would call a throughly spoiled kid. He gets away with a lot because his parents want him to have all the things they never had. But when they surprise him by refusing to let him keep a stray dog he has found, Tony decides to teach them a lesson by running off in his mother's old Plymouth. Driving without a license in the middle of a severe snowstorm, he picks up a hitchhiker named Cindy Reichert, an aloof girl who has always had difficulty forming friendships. To impress Cindy, Tony tries to show off his driving skills and ends up wrecking the car in a very desolated area far from the main highway. After spending precious days bickering with each other and waiting for rescue that never comes, they finally realize that their lives are at stake and they must cooperate to survive. The question is--can they survive?
Posted by Alford at 10:18 PM