The Death of Jayson Porter 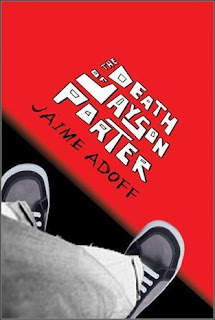 Jaime Adoff
The Death of Jayson Porter
Genre Drama
Sixteen-year-old Jayson Porter wants to believe things will get better. But the harsh realities of his life never seem to change. Living in the inland-Florida projects with his abusive mother, he tries unsuccessfully to fit in at his predominately white school, while struggling to maintain even a thread of a relationship with his drug-addicted father. As the pressure mounts, there's only one thing Jayson feels he has control over-the choice of whether to live or die.
Posted by Alford at 9:50 PM

I thought that this book was ok. It kept my attintion pretty well because of how realistic it is. When I say it's realistic, i mean cause so many people these days really feel the way Jason felt. I don't know how I could ever handle losing my best friend. It is so sad what Jason went through and what makes it worse is that there are people out there going through the same situation. I think i would rate this book a 3, because of how real it is and how emotional the book was.
-Katlynn Bryant

ill give this book a 9.5. i liked this book because i cant believe how someone could ever continue or be living this live and doesn't do tell anybody about it and having a cold hart mother and a beat down dad that is crackhead must be horrible because who are you gonna look up too.