The Vampire Diaries: The Fury and Dark Reunion 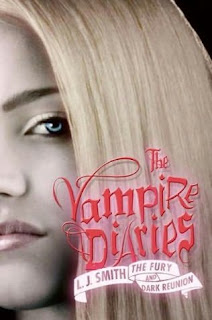 Books 3 and 4 of the series

Elena: transformed, the golden girl has become what she once feared and desired.
Stefan: tormented by losing Elena, he's determined to end his feud with Damon once and for all—whatever the cost. But slowly he begins to realize that his brother is not his only enemy.
Damon: at last, he possesses Elena. But will his thirst for revenge against Stefan poison his triumph? Or can they come together to face one final battle?
Collected here in one edition are the third and fourth volumes of The Vampire Diaries, a riveting conclusion to the tale of two vampire brothers and the beautiful girl torn between them.
This series has a TV show.  Check out the website at: http://www.cwtv.com/shows/the-vampire-diaries
Posted by Alford at 2:34 PM