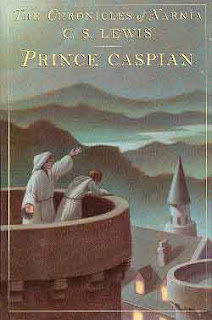 
Book 2 (or 3 in some numberings) in the series


Reluctantly returning to boarding school, Peter, Susan, Edmund, and Lucy are suddenly summoned to Narnia from a train station--by Susan's own magic horn! An urgent mission awaits them because Narnia is in trouble. All the magical creatures and Talking Animals have been forced into hiding by an evil king. Fortunately, young Prince Caspian, the true king, escapes in time to lead the Old Narnians in the fight for their freedom. But the battle is not going well, and in desperation, Caspian blows an enchanted horn. In a race against time and with the aid of the Great Lion, Aslan, they join Caspian and his army in a battle to restore peace throughout Narnia.
Posted by Alford at 8:27 PM