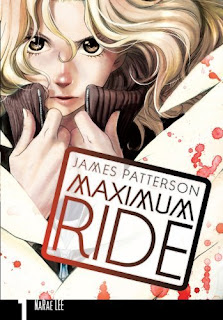 Hiding out in the wilderness of Colorado, Max Ride, 14, and her ragtag family of mutant kids think they're safe from the clutches of "The School," a secret government lab that has erased their memories and turned them into human/bird creations. When Angel, the youngest of them, is kidnapped by the Erasers–cruel half-man/half-wolf enforcers for The School–Max and several of the kids set off in search of her. Despite outwitting them in several instances, the Erasers are able to intercept them. But all is not as it seems when Max is released from her confinement only to be told the secret of her origin–that she was created to save the world.
Posted by Alford at 3:22 PM

well to start off i LOVE this book i usely dont like mangas or comics but this book got me hooked. this book is about the six kids that when the were babys got tooken or given up to the white coats,and the white coats did something really bad to them...they turned them in to birds and now max has to take care of herself and her gang.they were not the only ones who the white coats got but the other ones are bad unlike max and her gang...and now they got angel the youngest of them all and the only one that has not been turned in to a bird.but that could all chang now if they dont save her while they still have time.