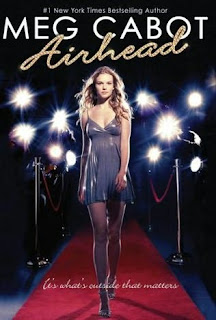 Book 1 of the Airhead series


Em Watts is gone...
Emerson Watts didn't even want to go to the new SoHo Stark Megastore grand opening. But someone needed to look out for her sister, Frida, whose crush, British heartthrob Gabriel Luna, would be singing and signing autographs there—along with the newly appointed Face of Stark, teen supermodel sensation Nikki Howard.
How was Em to know that disaster would strike, changing her—and life as she'd known it—forever? One bizarre accident later, and Em Watts, always the tomboy, never the party princess, is no longer herself. Literally.
Now getting her best friend, Christopher, to notice that she's actually a girl is the least of Em's problems.
But what Em's pretty sure she'll never be able to accept might just turn out to be the one thing that's going to make her dream come true...
Nikki Howard is here to stay.


EXTRA CREDIT TO ANYONE WHO CAN FIND A REPLACEMENT.

I mainly picked this book up because it was new to our class and no one picked it read. I didn't have a book for reading time and thought I'd give it a twirl. It was not a bad book, actually. Obviously it is aimed towards a teenage girl reader not old English teacher reader, it kept my attention for the most part. What kept me reading was the idea of waking up and being in someone else's body. I probably wouldn't read the second book in this series, but I give the book a 3 out of 5.